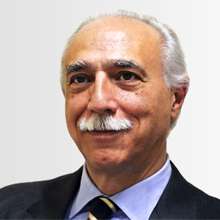 Fabio Rugge is an Italian political scientist, academic and provost. Rector of the University of Pavia from October 2013 until September 2019.

He was a member of the Executive Committee of the International Social Science Council and has served for seven years on the History of Administration working group of the International Institute of Administrative Sciences in Brussels. Since 1991, he has also been part of the scientific committee of the Istituto per la Scienza dell’Amministrazione Pubblica in Milan and as of 2015 he has become a member of the Rectors’ Advisory Group of the Coimbra Group

In addition to Italian, Rugge speaks and writes in English, French and German. His areas of interest are governmental institutions and public administrations which he analyzes in a historical context, comparing developments in different European countries. His works have been widely published in book form and journals. He sits on the editorial boards of several journals including Il Politico, Grotius, and Storia Amministrazione Costituzione (which he co-directs). From 2005 to 2011, he headed the Department of Political Science at the University of Pavia. He is a member of the board of directors of the G. Romagnosi Foundation, which he helped to found in 2003 and chaired until 2011. Over the years, he has advised many public bodies (among others: the regional councils of Lombardy, Veneto and Trentino Alto-Adige).

In 2006, Rugge became a Commander of the Order of Merit of the Italian Republica

In 2013 he became a member of the Conference of Italian University Rectors and later a member of its board. Since 2015 he has been appointed to lead the committee on international relations.

In addition, he is one of members of the advisory board that provides strategic advice to the management of Confindustria in Pavia.